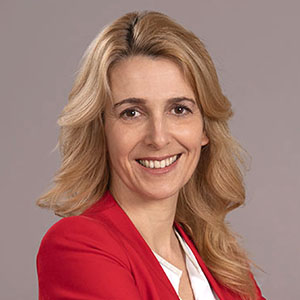 Prof. Vesna Bengin is the co-founder of the BioSense Institute – Research and Development Institute for Information Technologies in Biosystems, which focuses on multidisciplinary, game-changing, and needs-driven research of advanced ICT technologies and its applications in biosystems, primarily agriculture. She is the coordinator of H2020 project ANTARES, ranked as the first in the most prestigious H2020 call Teaming which aims to evolve BioSense Institute into a market-oriented European Centre of research excellence. With a budget of € 30 million, ANTARES is the largest research project ever funded in the Republic of Serbia by the European Union and, besides developing institutional scientific excellence, Prof. Bengin also directly focuses on fostering the policy development and economic growth of the region, through specifically designed activities involving the policy makers and national and regional agrifood and IT sectors.

Prof. Bengin holds the highest national degrees both in teaching and research: she is a full professor at the Department of Physics, University of Novi Sad, as well as the scientific advisor (principal research fellow) elected by the Ministry of education, science, and technology of the Republic of Serbia. She also holds the title of an Extraordinary Professor at Stellenbosch University in South Africa, as well as the position of a Visiting Scholar at the University of Pennsylvania (UPENN), USA. She has been a member of the Management Board of BioSense Institute since its establishment in 2015 until today, and the Vice-president of the same Board in 2015-2019. She has served as the member of the Management Board of the Innovation Fund of the Republic of Serbia in 2011-2017, and as a member of many European and international professional bodies such as the General Assembly of the European Microwave Association, and the Implementation Board of the Group on Earth Observations (GEO). Following the invitation of the European Commission, Prof. Bengin has served as a mid-term evaluator of the entire € 300 million worth intergovernmental framework programme COST (Co-operation in Science and Technology) financed by the European Union, where she has evaluated the political, scientific, and operational aspects of the programme. She has worked as a consultant for Fonds National de la Recherche of Luxembourg in 2017, as well as for a number of research institutions in Turkey and Slovenia in 2016. Since 2019, Prof. Bengin serves as a member of UNICEF Business Advisory Board in Serbia and a consultant for UN FAO (United Nations – Food and Agriculture Organization).

Prof. Bengin obtained her PhD in 2006 from the University of Novi Sad in the field of microelectronics, has led or participated in 8 FP7, 5 Horizon 2020 and many other international research projects, authored more than 100 scientific papers and published two books with world-renowned publishers (Cambridge University Press and John Wiley & Sons). Leading multidisciplinary research with a focus on the applications, he is also an active promoter of the importance of science with a large experience in public communications.

Prof. Bengin is the recipient of a number of national and international awards including the special award granted by the European Commission at ‘Marie Curie Actions for an Innovative Europe: Excellence, mobility and skills for researchers, the award for outstanding women in science and technology She’s Mercedes awarded by the Mercedes-Benz company, and many more.
She is a mother of three and a great promoter of active involvement of women in STEM.